When you barbecue, you’re playing with fire. This isn’t normally a problem because it happens in the controlled environment of your charcoal, gas, or wood pellet grill. But in the event that something does happen and a fire breaks out, you want to have the tools to put it out before it spreads and it gets out of hand.

This is where fire extinguishers—a piece of safety equipment we don’t talk about enough—come in. A fire extinguisher is one of those things you hope you’ll never need, but you keep in the house nevertheless. Because you’re grateful to have it when you need it the most.

The thing about fire extinguishers, though, is that there are multiple types. And, as you probably know by now, not every type is suitable for putting out a fire that started in your grill or smoker.

To help you choose, we rounded up what we believe are the best fire extinguishers for grilling and meat-smoking that you can buy on the market today. If you’re on the hunt for one, we wrote this guide for you.

For details about our picks, see below. 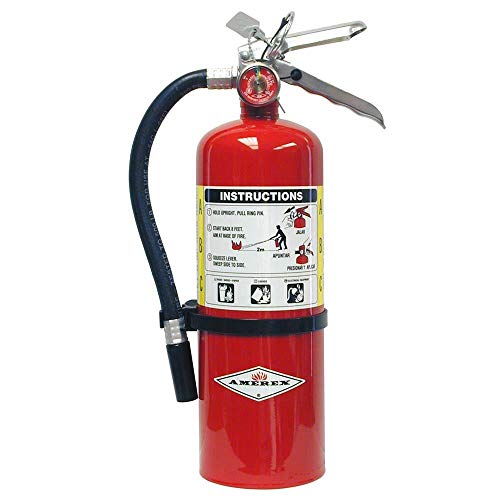 This ABC dry-chemical fire extinguisher is suitable for extinguishing fires in the kitchen and backyard. It's rugged, user-friendly, and refillable after use, and has a 6-year manufacturer's warranty.

A friend of mine who’s a volunteer firefighter says that no one makes fire extinguishers as good as the Amerex Corporation of small-town America’s Trussville, Alabama. Considering the number of fires he has put out and the lives he has saved over the years, I am inclined to trust him.

The Amerex B402 is an ABC dry-chemical fire extinguisher.

In other words, it is suitable for extinguishing Class A fires (namely, paper, cardboard, cloth, trash, and wood), Class B fires (flammable liquids), and Class C fires (appliances and electrical wiring).

This makes it a multi-purpose fire extinguisher to have at arm’s reach not just for when you’re grilling or smoking meat but for all around the house, garage, shed, and backyard. It’s rugged and well-built, with drawn-steel cylinders and all-metal valves, and comes with a 6-year manufacturer’s warranty.

If you have to use it, God forbid, the Amerex B402 will disperse specially fluidized and siliconized mono ammonium phosphate, a dry, powdered chemical that suffocates and smothers the fire within a matter of seconds. (Discard time is 14 seconds.)

It’s economical to maintain and refillable after each use. The only drawback to this fire extinguisher—and to dry-powder fire extinguishers as a whole—is that you’re left with a lot of cleaning to do after you’re done putting out a fire with it. 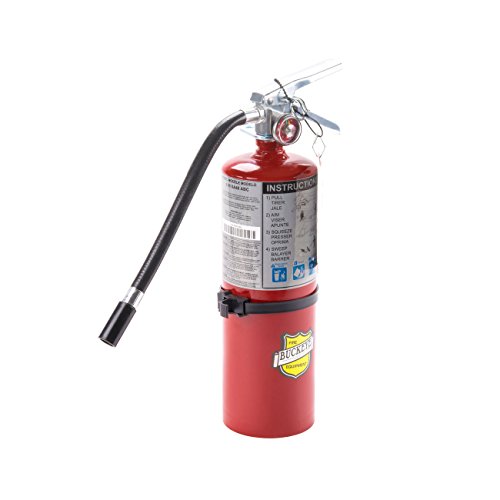 This ABC multi-purpose fire extinguisher has an aluminum has a steel cylinder and an all-metal aluminum valve that holds up over time. It's refillable after every use and has a 6-year manufacturer's warranty.

If our top product is out of stock or you’re the type of shopper who likes to consider more than one option before they buy, as I am, take a gander at the Buckeye 25614.

It holds mono ammonium phosphate fire-suppressing agent with a capacity of about 5 lb, is refillable after each use, and has a 6-year warranty. Like our top pick, discharge time—meaning the total time you have to extinguish the fire—is about 14 seconds.

All in all, the Buckeye 25614 is a great alternative to the Amerex B402, with similar capacity and features. Also, both of these products are made in the USA. So when you buy either of them, you’re supporting American businesses. 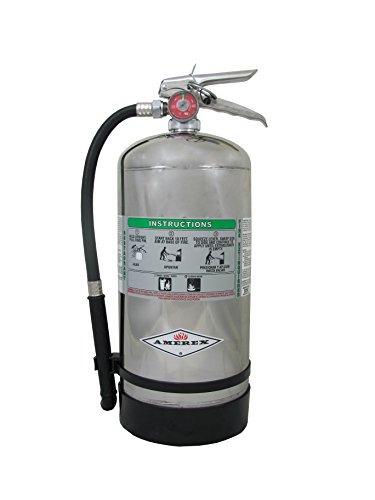 This wet-chemical fire extinguisher is what they have in food trucks and restaurant kitchens. It's the only type that can effectively put out a Class K fire, i.e., enflamed grease, animal fat, or plant-based oil.

The Amerex B260 is a Class K fire extinguisher for fighting grease fires from cooking. Not surprisingly, you will find it strapped to the walls of food trucks and restaurant kitchens. Many would go as for to say that it’s overkill to have it in the home.

But if you are dealing with a grease fire on a gas grill, a soot fire in your smoker’s chimney, or anything involving enflamed cooking oil in the kitchen, a Class K fire extinguisher is the only one that will really be able to put it out for good.

This one, the Amerex B260, with a body and all-metal handle made out of stainless steel, discharges a fine mist of potassium acetate that cools down and puts out grease fires by coating them with a soapy foam that stops combustion. Discharge time, thanks to the larger capacity, is 53 seconds.

To understand what makes our last pick different from the rest on our list, refer to our buyer’s guide below.

A couple of years ago, America Test Kitchen’s Lisa McManus tested a few fire extinguishers, and the Kidde FA110 came out as the clear winner.

Charged and ready to use, this fire extinguisher is cheaper than our picks because it has half the capacity (2½ lb in comparison to 5 lb). The body and the gauge are made out of aluminum. The safety pin is easy to pull and the gauge is easy to read, even under the stress of having to put out a fire.

What Kind to Buy

Never try to put out a fire involving grease, fat, or oil with water; it will cause the scorching-hot lipids to splatter, potentially giving you burns, and the fire to spread.

ABC fire extinguishers, also called “multi-class” or “multi-purpose” fire extinguishers, are the most common and universal type found on the market. They contain a dry, powdered chemical called mono-ammonium phosphate that coats the fire and suffocates it, effectively putting it out.

They are inexpensive, widely available, and the type the National Fire Protection Association (NFPA) recommends having on every floor of your home. However, the dry chemical is highly corrosive—so you have to clean it off of any surface it has coated, which can be quite difficult.

I’ve only had to do this once, and pressure-washing the powder off of the grates, kettle, and lid, then giving it a good scrub-down with soapy water, was what did the trick for me.

Class K fire extinguishers are meant for extinguishing fires involving animal fats and vegetable oils in commercial kitchens. They’re known as wet chemical fire extinguishers because they coat the enflamed fat with a soap-like foam that stops it from burning. Hotels and restaurants are required to have Class K extinguishers in their kitchens.

So, what’s the difference?

An ABC-type extinguisher is generally effective for most types of fires except for a grease fire.

Features to Look For

Whether you choose an ABC, dry chemical fire extinguisher or its Class K, wet chemical counterpart, there are a number of features to look for.

First of all, the fire extinguisher should be big enough to put out the most common types of fires started by a grill or smoker, but not so large that not everyone in your household can carry it.

Most of the ones designated for the home and vehicle have a capacity of 5 lb. Avoid spray cans that claim to be as effective as the real thing. The only thing they do is waste time, and that isn’t something you have a lot of when a fire is burning.

With a portable fire extinguisher with a hose, it’s usually easier to direct the chemical agent at the fire than with one without. This is especially useful when a fire is burning in a confined space, such as when a build-up of soot catches fire in your smoker’s chimney.

Last but not least, look for an all-metal handle because it’s the only kind that holds up. The Kidde FA110, for example, was initially released with a handle with plastic. The manufacturer recalled the early models and replaced the handle with a metal handle that stands the test of time.

As harmless of a hobby as outdoor cooking may seem, grilling and meat-smoking are a fire hazard. So much so that you can’t grill in the garage, and it isn’t safe to grill on a balcony.

Buying a portable fire extinguisher for the home and backyard can be intimidating, especially if you haven’t done it in a few years or never have. We hope we’ve helped you make a better-informed choice with this guide!

Sammy, a pen name, is a die-hard carnivore, barbecue whisperer, and self-proclaimed master of the grill.

View all of Sammy Steen's posts.

Barbehow is the authority on BBQ and grilling.